You are here: Home / Dealers / Common Causes of Fish Kills in Your Pond or Lake

What Killed My Fish?

The first question everyone has when they notice fish floating in open water or washed up along the bank is: what killed my fish? 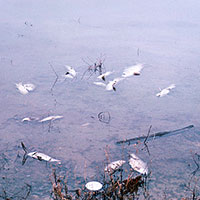 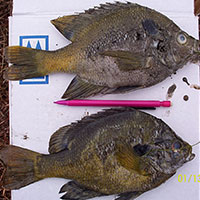 During the summer, your pond or lake tends to stratify by temperature driven density differences with warm water on top and cool water at the bottom of your lake. Oxygen stratification is also very evident in the summer months. High oxygen concentrated water occupies the upper parts of a lake due to greater wave action and biological activity in this area. At lower depths, wave action has little affect, and biological activity is greatly reduced since the sun does not reach these depths.

Where your fish begin to die in the large oxygen swing fish kill is when these aquatic weeds and algae switch from photosynthesis during the day to respiration at night. What happens is the plants that supersaturated the water with oxygen begin to consume oxygen and produce CO2, essentially supersaturating the water with CO2. Fish are not like plants; they cannot switch from breathing oxygen to breathing CO2. You usually find your dead fish in morning; with large oxygen swing fish kill. Both types of summer fish kills can largely be prevented by proper supplemental aeration.

The table below will help generally determine which type of fish kill you experienced.

A few scientific principles will allow us to better understand the functions behind lake turnover fish kills. 1) Cool water holds more oxygen than warm water, and 2) cool water is denser than warm water.

Contact Keeton Industries for aeration solutions to fish kills specific to your pond by clicking here.

Keeton Industries would like to thank Brad Vollmar for sharing his research on our website.
If you are in the Fredericksburg, Texas area, contact Brad to manage your pond or lake.
Phone: 830.992.0928
Fax: 888.232.3614
Email: brad@texaspondmanagement.com
Address: 5265 White Oak Rd. Fredericksburg, Texas 78624-7196
Website